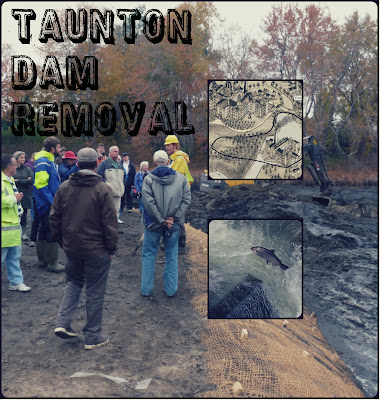 Eight years after the Whittenton Dam’s near-failure threatened hundreds of homes and businesses in Taunton, MA, the infamous dam will be removed, and fish passage will be restored to a key segment of the Mill River.

Conservation organizations, state and federal fisheries and wildlife agencies and local planners have joined to create the Mill River Restoration Partnership.  The partnership’s goal is to remove three dams and construct a fish ladder at a fourth dam—the Morey’s Bridge Dam—along the Mill River. Last year, the Hopewell Mills Dam was removed, and the floodplain was restored. The fish ladder also was constructed at Morey’s Bridge Dam. Ultimately, the project will restore native alewives, blueback herring and American eel to more than 30 miles of habitat in the Mill River, Canoe River, Snake River, Lake Sabbatia and Winnecunnet Pond.  The project will also eliminate the public safety threat associated with the aging dams.

Massachusetts is home to approximately 3,000 dams, many of which are over 100 years old. The 2005 crisis prompted the formation of the Mill River Restoration partnership that has led the dam removal project, as well as legislative efforts to make the removal and repair of aging dams easier for Massachusetts communities. Dilapidated dams pose flood risks for surrounding communities, while also slowing the recovery of New England fisheries. Hopefully the Taunton project will continue to draw national attention to the risks of aging dams, and motivate further action.
Posted by Unknown at 11:59 AM