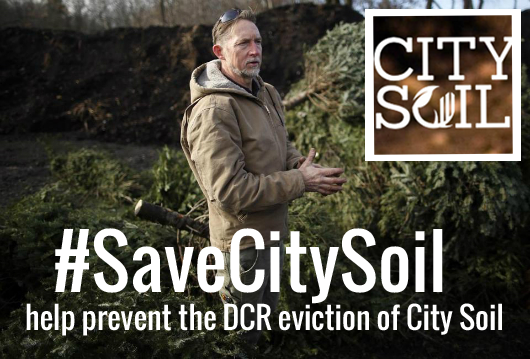 
City Soil operates its composting site at the Boston Nature Center in Mattapan. They have partnered with the Suffolk County Conservation District to develop the Mattapan Ecovation Center, an enclosed composting system and intensive 4-season urban agriculture demonstration on state-owned land leased from Zoo New England.

Unfortunately, the Department of Conservation and Recreation (DCR) recently announced a plan to evict City Soil from 50% of their leased site – including the area dedicated for the innovative urban agriculture project. Why? An out-of-town corporation, Landscape Express, has strong-armed the DCR into evicting City Soil and awarding the leased land to them for sales and parking space, under a no-bid expansion of their contract to manage the DCR’s neighboring site.

To prevent this eviction, hundreds of City Soil supporters such as the Conservation Law Foundation, Higher Ground Farm, Boston Natural Areas Network and more called State Senator Pacheco and Environmental and Energy Affairs Secretary Sullivan. Pacheco called the founder of City Soil that day and let him know that he heard the message loud and clear, but he's not sure  he can do anything about it. City Soil then made its next move and collected over 200 signatures on a petition to send to Governor Patrick.


You can help support city soil by joining the twitter campaign #savecitysoil and by calling Secretary Sullivan or Governor Patrick's Office: