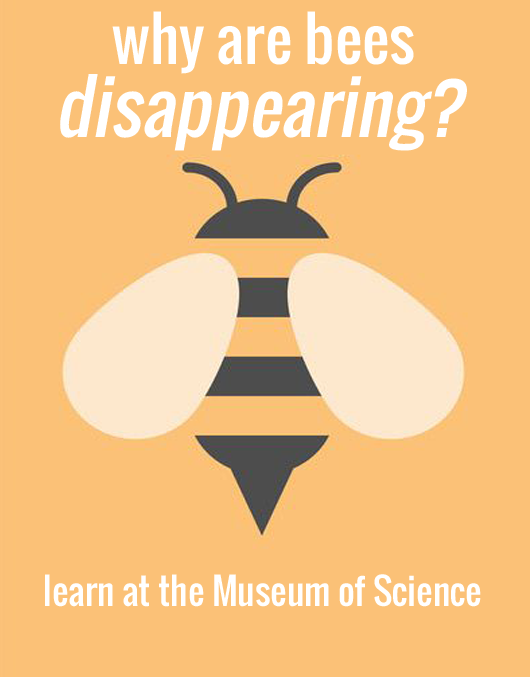 Boston's Museum of Science is concerned alongside farmers, agriculturalists, economists and consumers with the sudden decline of the honey bee population.  Bees are responsible for the pollination of flavorful goods such as almonds, peaches, soybeans, apples, pears, cherries and many others.  They are commercially shipped en masse across the U.S. often for rental by farmers.  The bee population has fluctuated over time but this recent extreme loss of bees can is defined by Colony Collapse Disorder (CCD).  The main factor in this phenomenon is that the bees seem to disappear.  In CCD Cases, there are very few dead bees found in the hive or around the apiary and sometimes the bees leave behind larvae and eggs.

Honey bee pollination supports an estimated $25 billion worth of agricultural production.   As of now, there isn’t an explanation for this drop in bee population.   A Museum of Science representative, Erin Ross, mentions that one theory may be, “Varroa mites, viruses, climate change, pesticides, and other factors - combine to create the ‘perfect storm.’” Many organizations, private and government funded, are committed to finding an explanation.

The Museum of Science’s Hall of Human Life offers a section on the bee’s role in food production, their social structure and their unique ability to reverse aging and return to a former body type.  Our Discovery Center allows children to dress up as bees and do the “waggle dance” in order to teach them about how bees communicate the location of pollen and nectar.  From this exhibit you can see three working hives located on the roof, one of which should be very active as the weather warms up. There is also another hive on display in the Museum.
Posted by Unknown at 8:00 AM