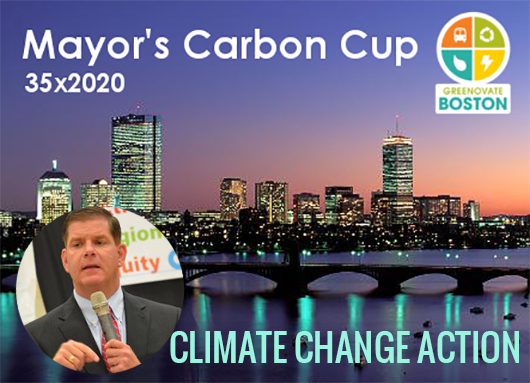 On April 8, 2014 Mayor Walsh announced the Greenovate Boston Mayor’s Carbon Cup, a voluntary program for hospitals, universities, and commercial building committed to reducing their greenhouse gas emissions by 35% by 2020. In order for the City of Boston to reach its citywide target of reducing Greenhouse Gas Emissions (GHGs) by 25% by 2020, large building portfolios will need to lead by aiming for a higher GHG reduction target.

“A cleaner, greener, and more prosperous future, as outlined in our Climate Action Plan, requires leadership from every sector.” said Mayor Walsh. “Carbon Cup pledges and winners will represent the cream of the crop for our large buildings, demonstrating what’s possible in energy efficiency, while greening our city and creating quality jobs.”

“Commercial buildings comprise over half of the city’s greenhouse gas emissions.” said Brian Swett, Chief of Environment, Energy Services, and Open Space. “Getting our biggest property owners enrolled could cut emissions by over a hundred thousand metric tons of GHGs, equivalent to ten thousand homes taken off the grid.”

The City is seeking initial pledges and possible Carbon Cup winners to be announced at the Greenovate Boston Community Summit on May 31. Over the summer, the City will work with initial participants to finalize guidelines for reporting and accounting, and continue to source new participants. The Carbon Cup is a part of the larger Renew Boston Commercial/Industrial Strategy for saving energy and bringing down the GHG footprint of Boston’s institutions and businesses. Guidelines can be found at http://greenovateboston.org/resources/actions/mayors-carbon-cup/. Interested entities should contact info@greenovateboston.org.