Last week I went to my first MIT Enterprise Forum Event. Beforehand, I was nervous that the panel on Intelligent Green Building would be too technical and specific for my taste, but I was pleasantly surprised. The discussion was informative, but also easy to understand.
The evening began with a VIP cocktail hour at the R+D Lounge at MIT. The crowd was a well rounded group of architects, engineers, people from USGBC, The Sustainability Roundtable, and area law firms. I had some great discussions, but I have to admit, I was a bit disappointed that there were no organic or local beer and wine choices (and the panelists were later given BOTTLED WATER!). I stuck with Allagash White - which I decided was reasonably local, given the selection. Then we all gathered downstairs for more snacks and conversation before the panel began. 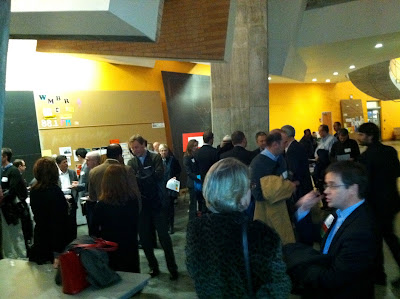 Fun Facts I Learned During the Panel:
- Boston was rated the 7th most sustainable city by Sustain Lane
- 75% of GHG emissions in Boston come from buildings
- Boston was the first city to incorporate LEED standards into city zoning laws/regulations.
- The average "green home" is expensive - $235 per sq. ft.
- Lighting and plug loads account for most energy use in homes
- MA is a water-rich state, so there is great potential from storm water reuse, but greywater and blackwater systems are expensive to build.
- The MWRA uses waste water movement (aka toilet flushes) to power their plant.
- People are naturally risk averse which may be why people don't live a more "green lifestyle"
-  Ideas like "Green Leases" may be the future for the green movement in Boston, which will require cooperation from owners, managers, and renters. 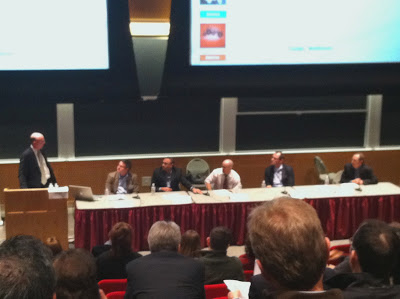 I took a ridiculous amount of notes during the panel - it was very interesting and I definitely look forward to attending more MIT Enterprise Forum events - especially the one on February 16th about the future of green transportation.
Posted by Unknown at 12:58 PM